This week in Print Stories we talk to artist Stuart Forrester about the inspiration and process behind his work. Scroll down to find out more and see the artist’s process. 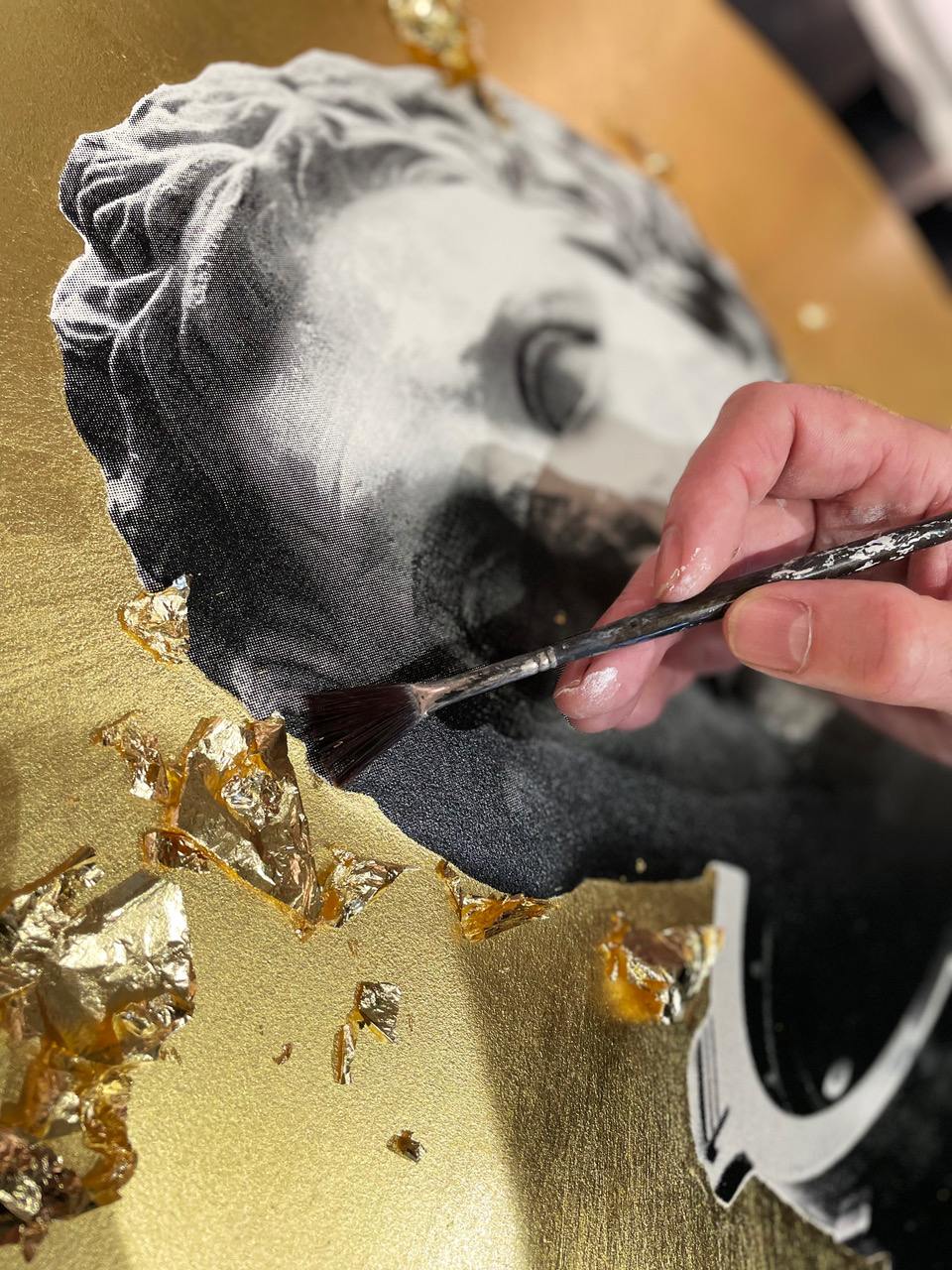 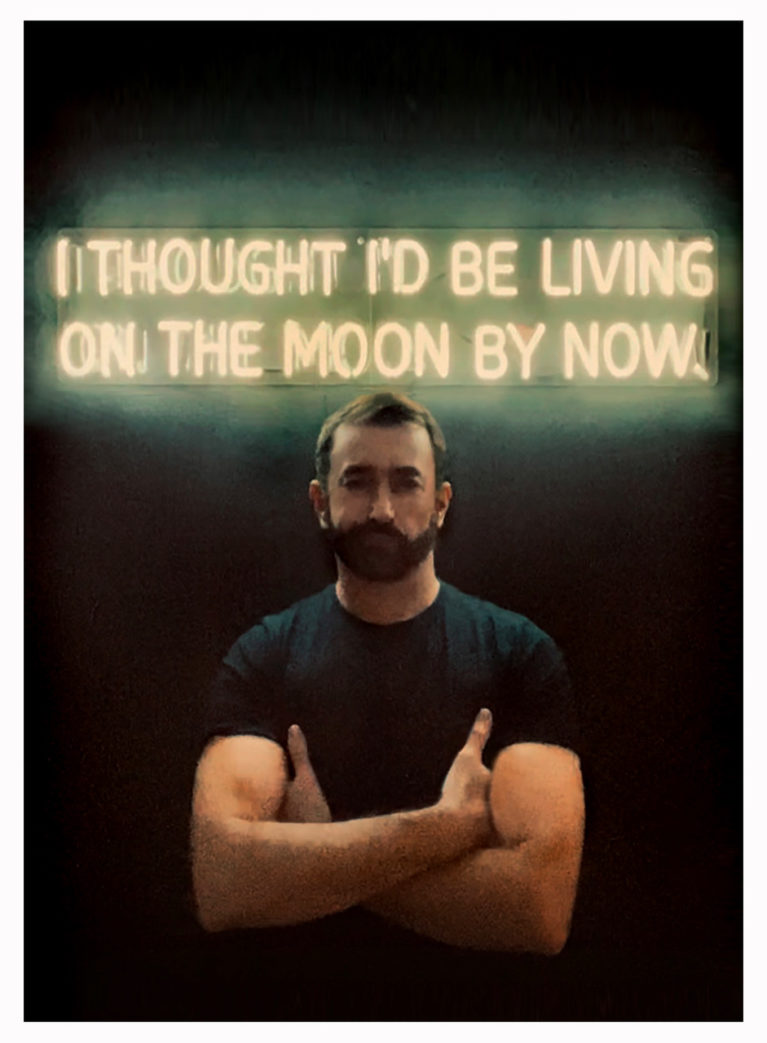 Stuart graduated from Central St Martin’s School of Art with a First Class BA Hons in Fashion Design followed by an MA  in Film Production Design.

Over the years he has worked in several creative areas including Film Production and prop making, Art direction for Television, Product development and Interior design for both private and commercial spaces. He recently returned to his first love of image making and his work focuses on combining classical and modern imagery to create a new narrative showing how time marches forever forward  but human fears and desires ultimately remain the same. His art is best described as a dark and subtle clash between the Iconic and  the ironic. 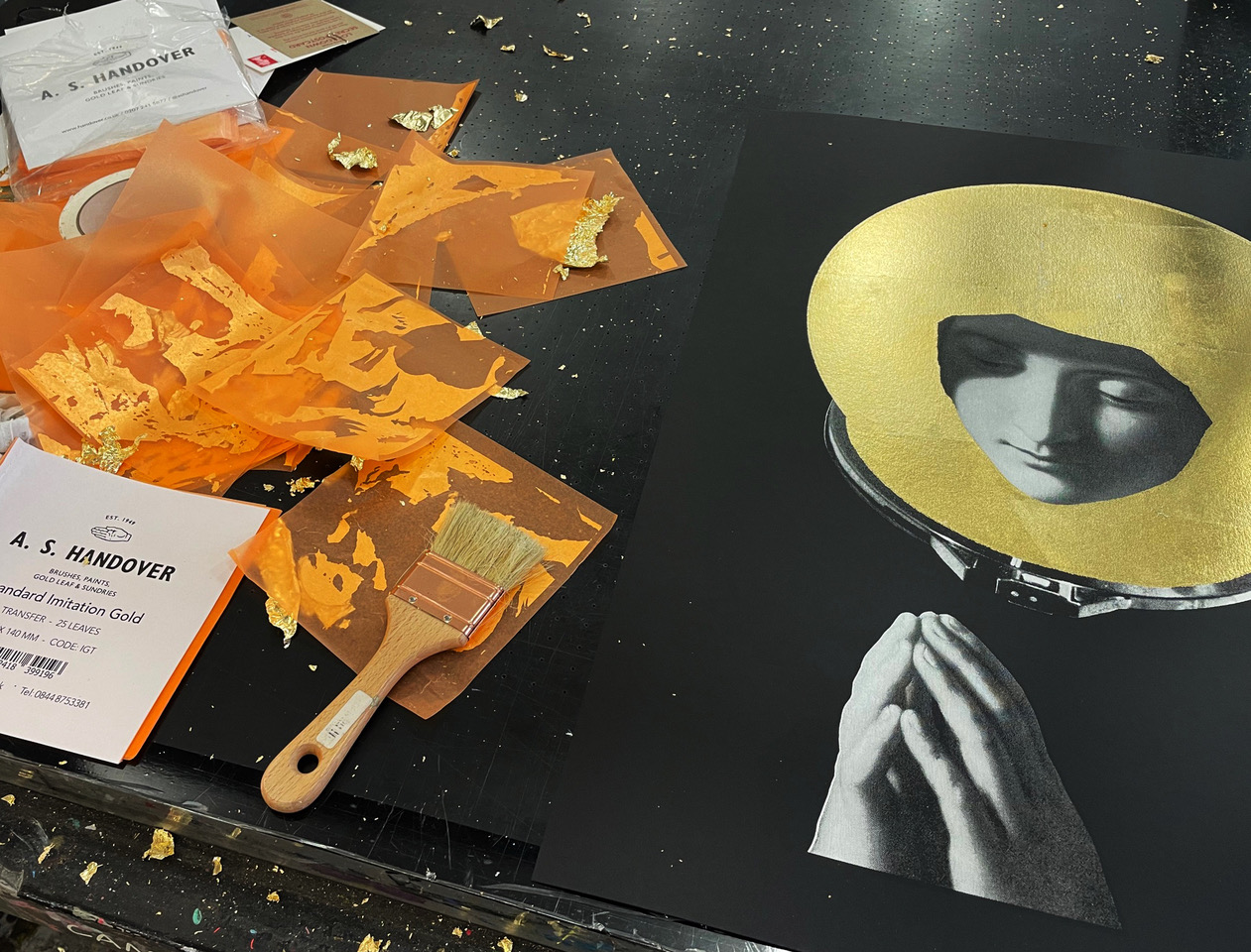 The sheer comedy of existence as we battle against the knowledge of our own mortality and how that ultimately shapes our individual desires and ego.
As a starting point the solitary figure in art is my greatest inspiration, from the idealised beauty  of classical sculptures, the long forgotten portraits of the once renowned through to the nonstop onslaught of social media selfie photography  today,  we are forever manufacturing individual tales of wealth and beauty, of power and success, to portray an everlasting  perfect image… while keeping our darker truths  deeply hidden to perpetuate the myth we have created … yet it is among these hidden truths that we ultimately find true humanity … and it is these tales I’m inspired to tell. Like stars in the firmament we are billions, and yet within us we each carry our own truly unique story and a desire to shine alone.

As my world grew ever smaller during lockdown I took inspiration from the real minutiae of  life in enforced solitude. No longer able to visit art galleries or museums I found great joy in what I could still see, and found I looked much closer at the world directly around me than I ever had before … the overlapping layers of graffiti along my daily walk, advertising posters neglected and weather worn, random once loved objects now abandoned on the street, the fascinating overheard conversations of people in the long queues at my local supermarket. I think the real joy comes from allowing inspiration to just happen rather than seeking it out.  My print ‘Every Body Has a Tale to Tell’  was directly inspired during one such daily walk to my local park where I saw a heavily tattooed man wearing nothing but his underwear shouting proudly… ‘nobody knows I’m a superhero’ 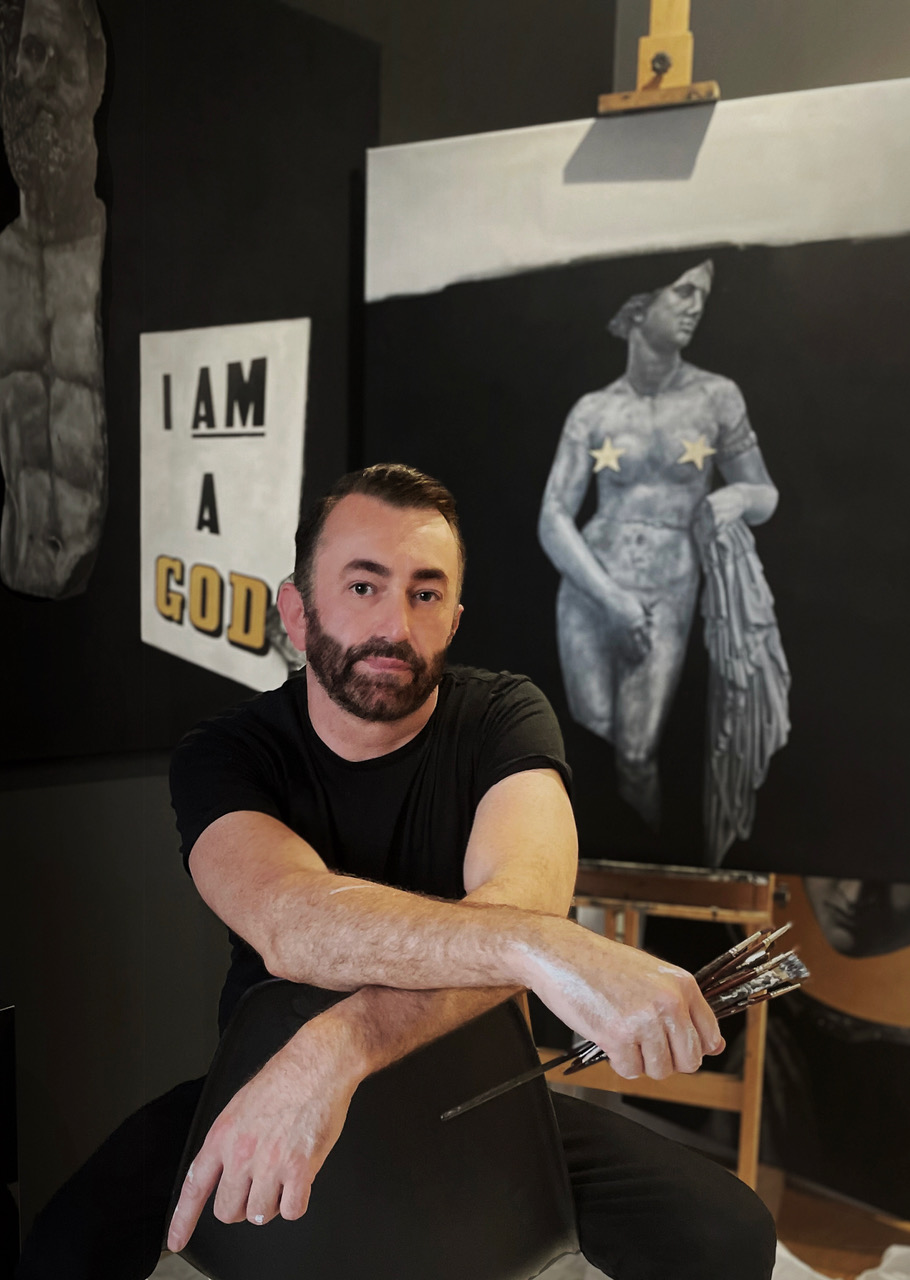 I’ve always been fascinated by the construct of fame, the immortality this bestows upon the individual and the human desire for it. In the past people were solely famous for their achievements but in modern times fame has become the achievement in itself.
By collaging an ancient icon of idealised male beauty with a modern icon of adventure… the Astronaut … And placing them both onto a circular gold leafed disc reminiscent of the iconography worshipped in certain religions, I wanted to create a visual antidote to the banality of modern fame, to create someone worthy of adulation. 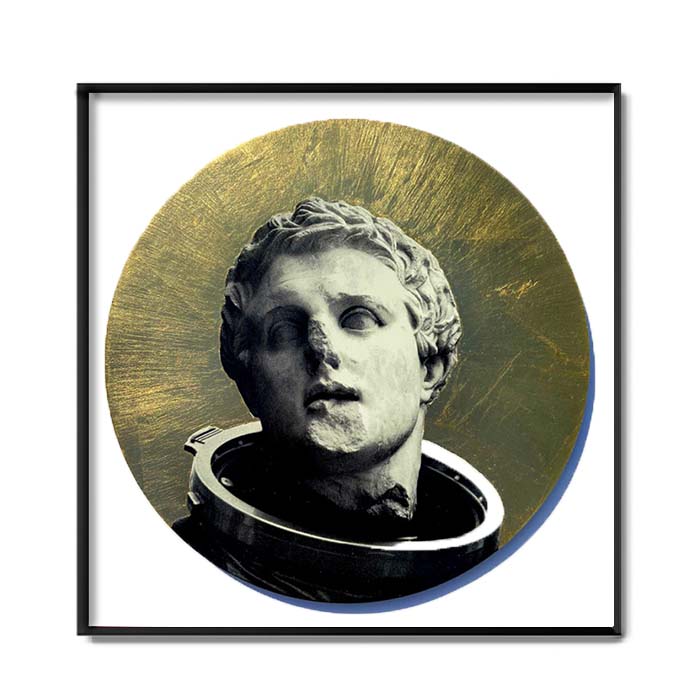 Icons Change Over Time by Stuart Forrester
Edition of 69, £250 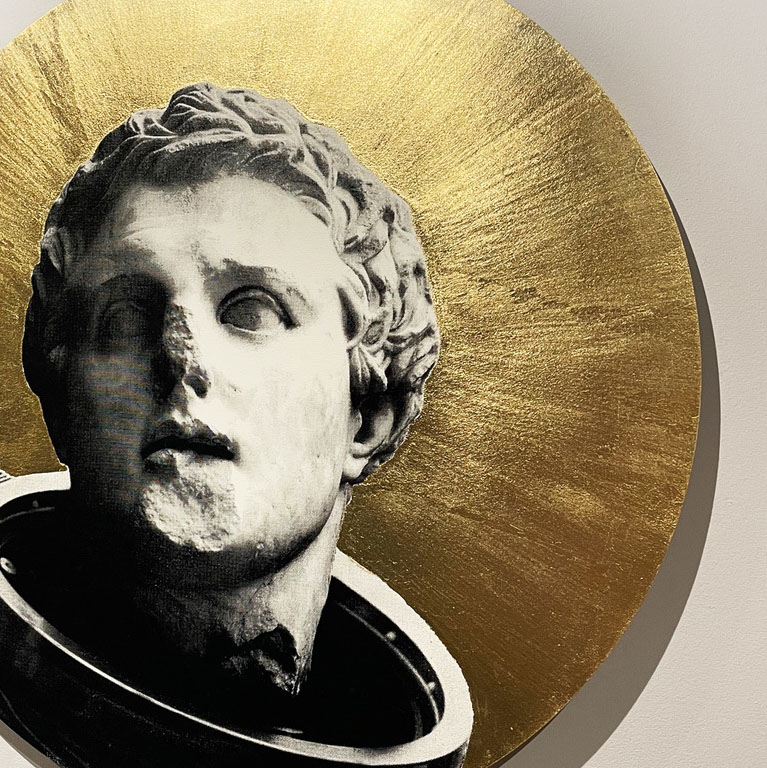 My main interest is the human condition and the tales therein, so my influences can come from anywhere that speaks of what it is to be human … films, novels, news reports, photographs, song lyrics, advertising, old family stories, childhood memories… literally anywhere mankind treads… which keeps the creative process forever new and exciting as I never know exactly what will inspire me to create next.

Scribbling…. I’m a massive fan of quickly scribbling down almost  every idea  that comes into my head and it’s a great way to formulate a new vision at great speed  without being too precious about the eventual outcome.
Once I have a specific idea in mind I’ll research and collage images together to create the final piece to work from. I prefer to use a very limited colour palette of black, white with metallic finishes so that the final pieces can hopefully hover in time visually rather than being solely anchored to the here and now. 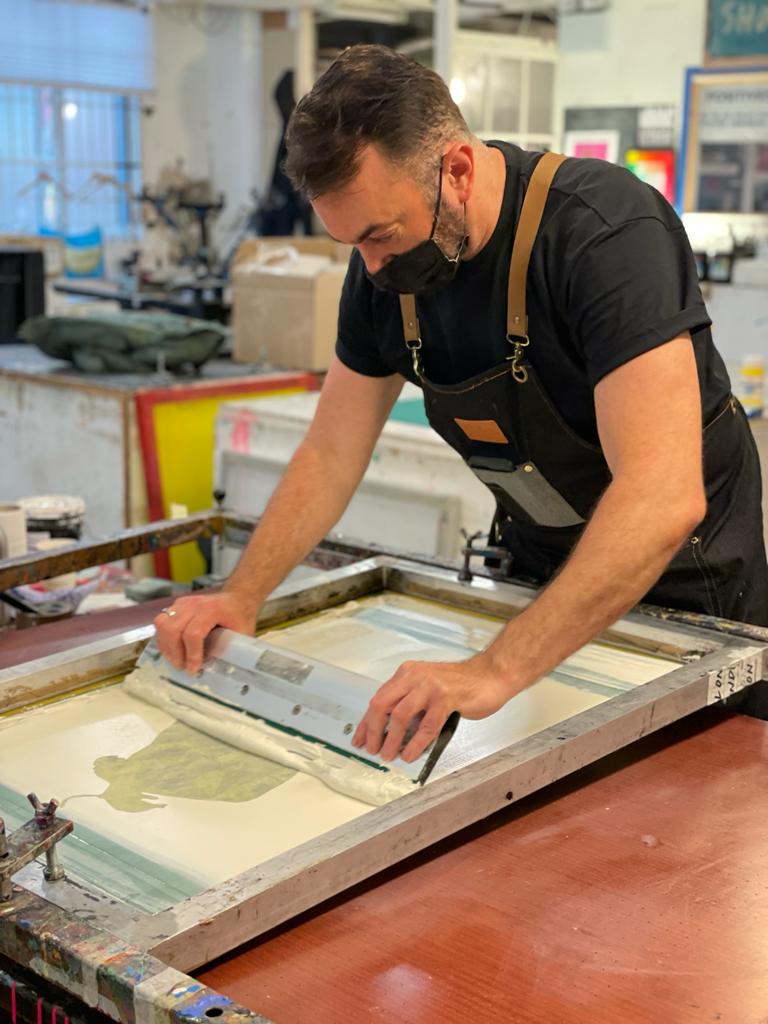 When I was studying at Central St Martins a lecturer once told me ‘Sketch down every creative idea you have, no matter how small or insignificant you may think it is at the time, as you can  never tell what will spark your imagination next week, next month or even in ten years time.
So I’ve always followed that advice and have a large old wooden box filled with hundreds of scribbles on old napkins and beer mats and scraps of paper stretching back years, so whenever I feel uninspired I look through it all and there is usually a long forgotten gem in there that inspires my next piece of work. 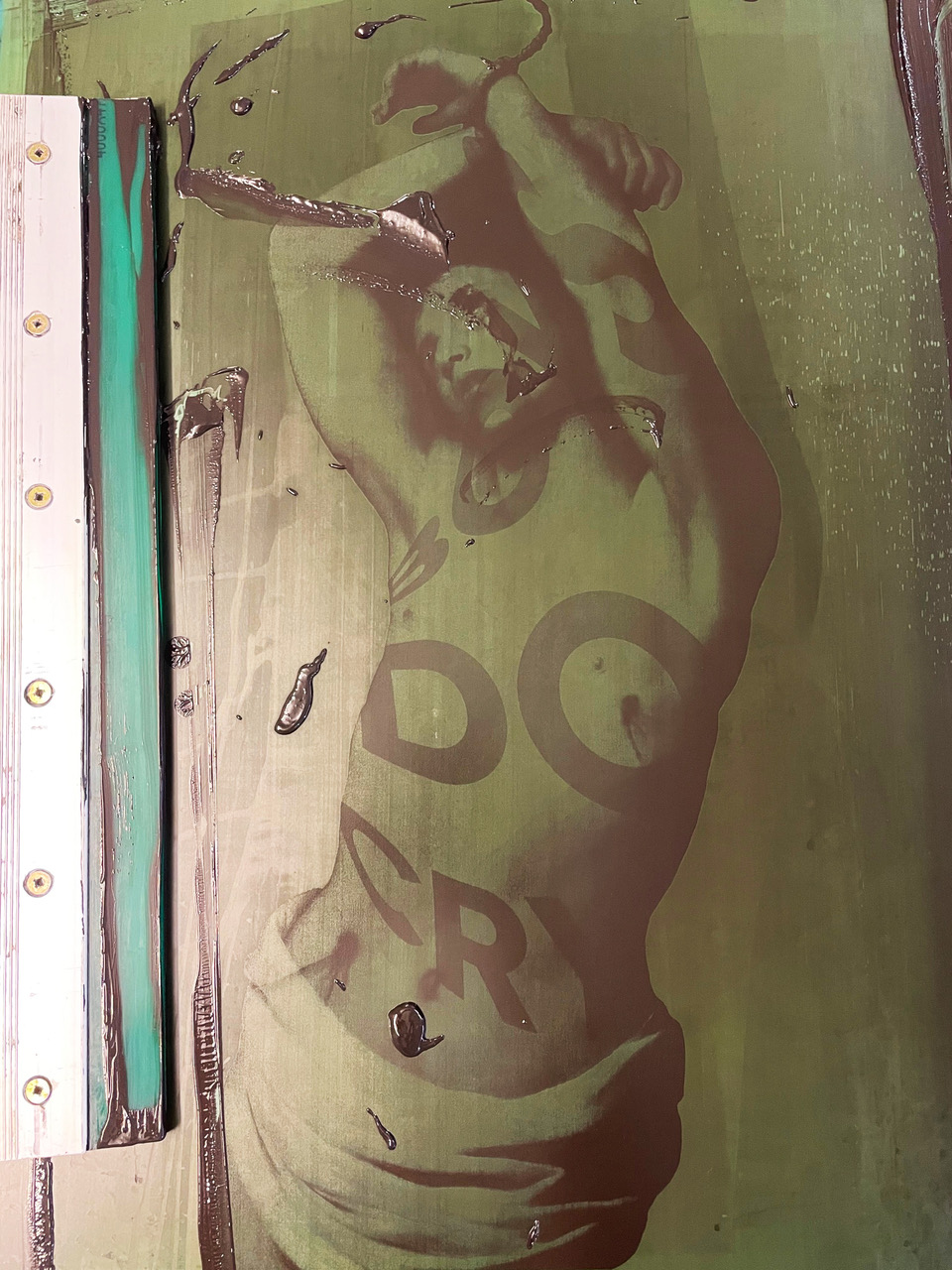 My prints are visually quite simple usually on a solid black background so I would always choose a very simple black smooth float frame to complement this, creating shadow and depth behind the print. 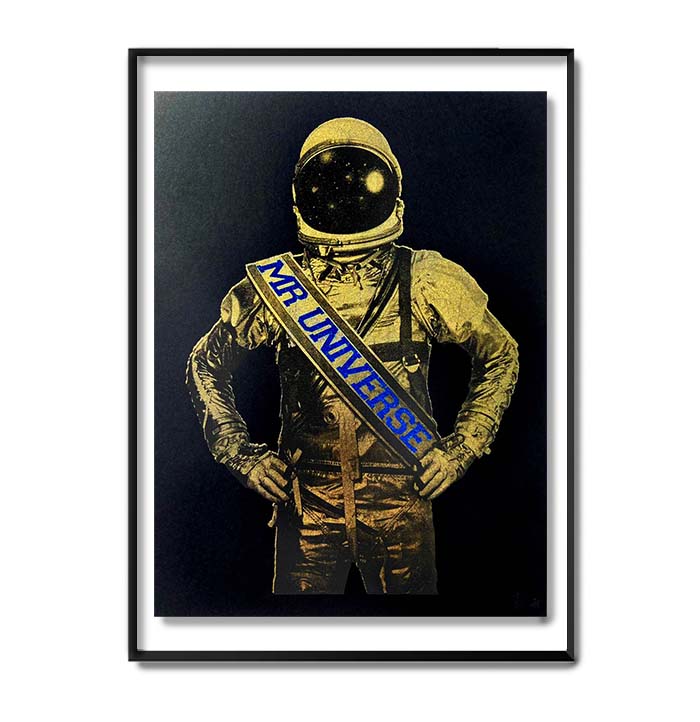 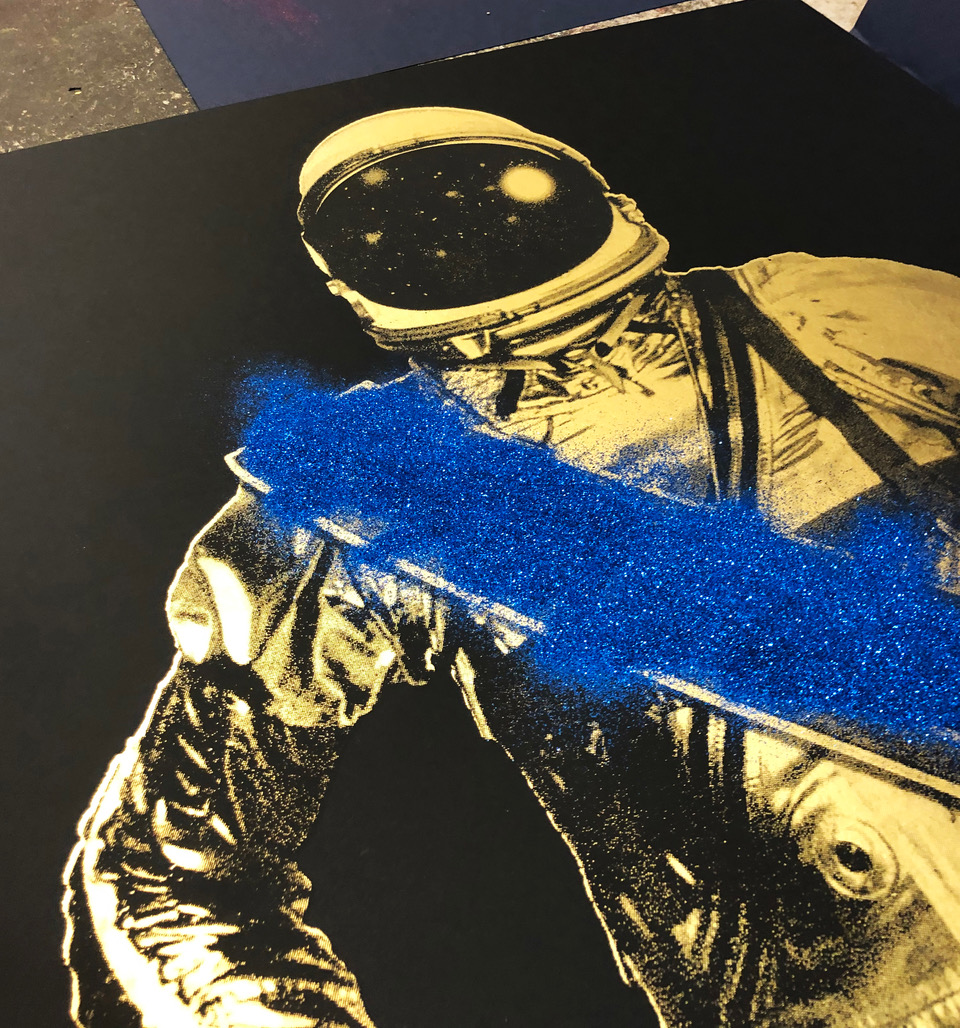 I love to use negative space in a lot of my work so ideally I would curate my prints to have that same visual language when hung on a wall and stand alone or at least be surrounded by enough empty space to tell it’s own story, rather than being hung in a cluster.
In regards to pairing my work with another artist I would happily display my piece ‘Icons Change Over Time’ between a selection of Cassandra Yap’s prints  ‘Royal Flushes’  on vintage adult playing cards as I think the masculine juxtaposed against the feminine in such a display would create a really interesting and humorous visual language. 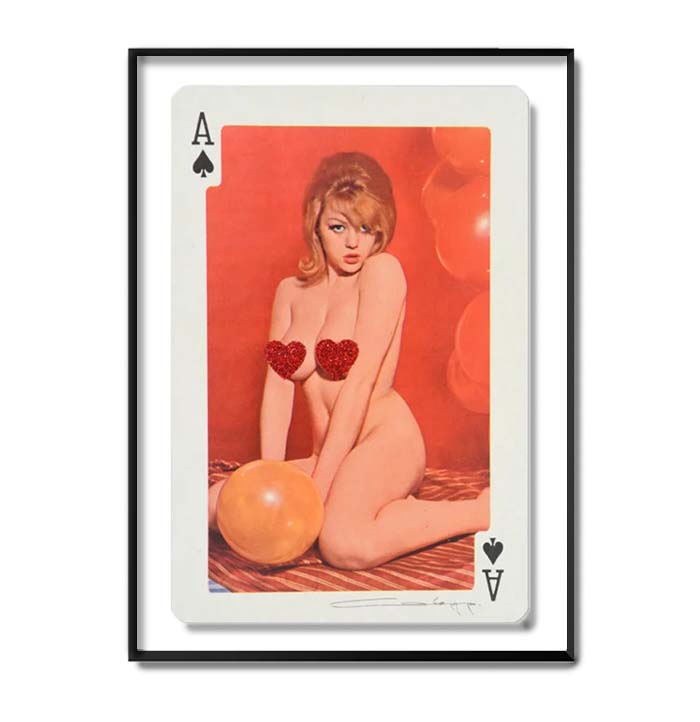