We’ve been talking to artist David Studwell and photographer Scarlet Page about their series of limited edition Liam Gallagher screenprints. Scroll down to find out more behind the portrait and the process of their collaboration! 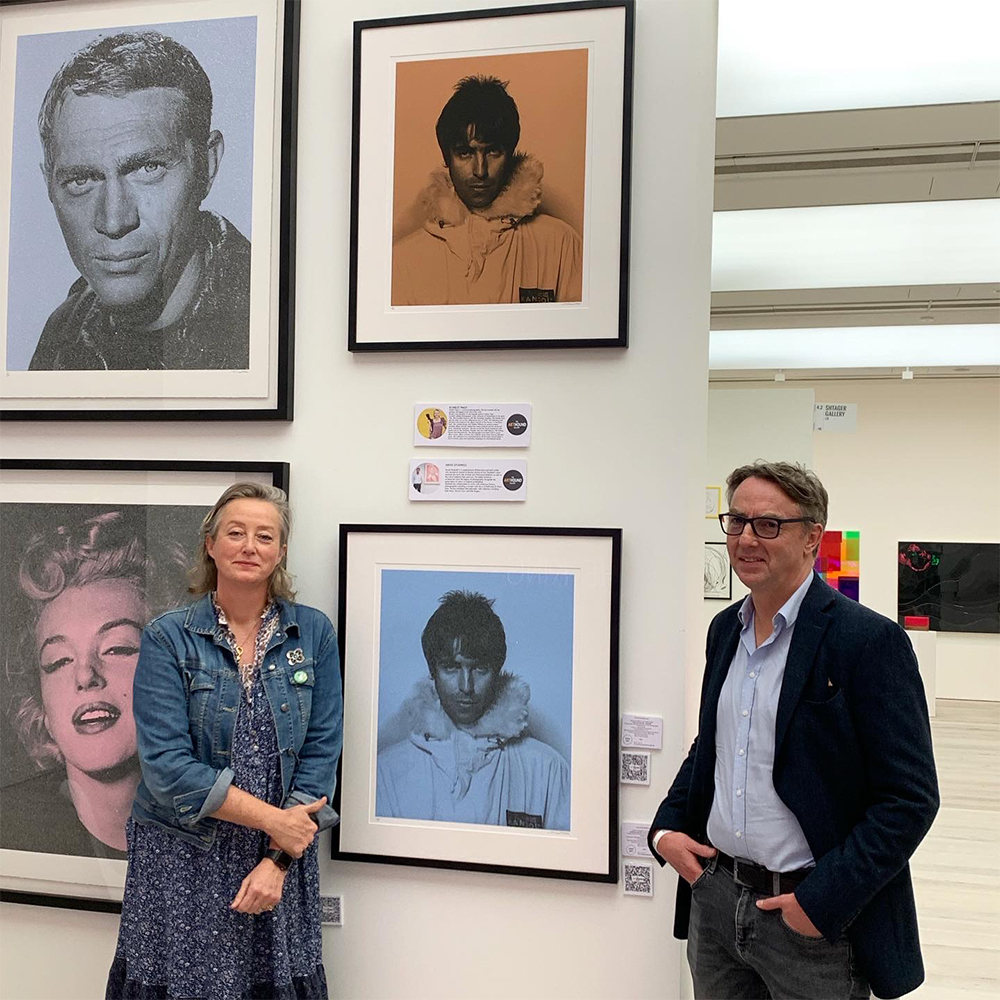 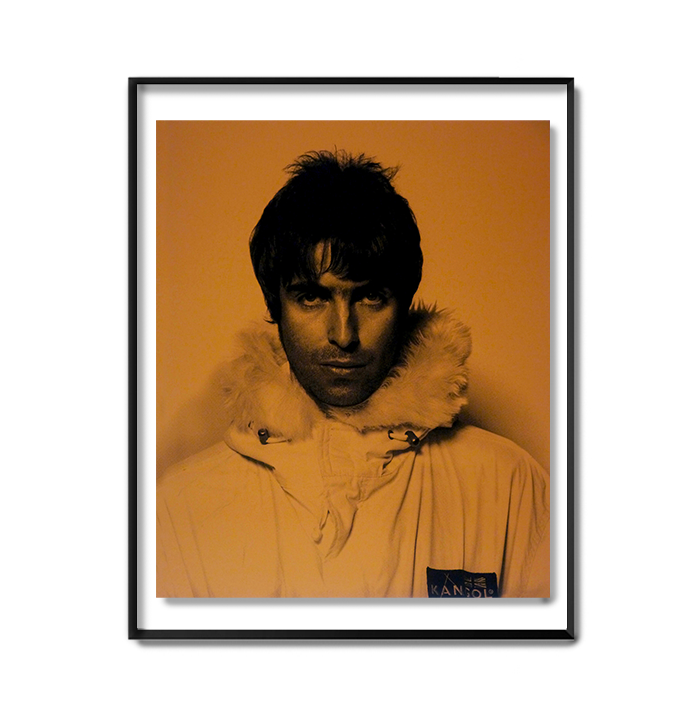 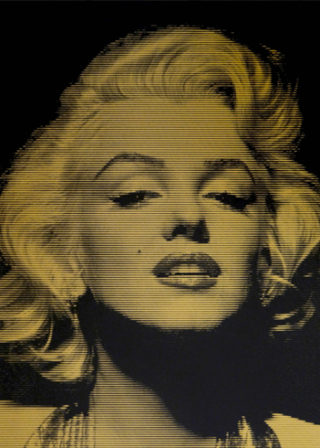 David Studwell combines traditional printmaking techniques with a modern approach to create dynamic and vibrant artwork. He is influenced by popular culture, cult movies and Pop Art in particular, which is evident in his extensive and exciting range of prints. Having studied art and design at the prestigious Central Saint Martins, Studwell joined a printmaking studio in West London. He has exhibited in The London Print Studio where he makes the majority of his work as well as showing in other galleries in London and the USA.  David has been published several times; his work has been featured in GQ, Elle and World of Interiors magazines, as well as French broadsheet Le Monde diplomatique a number of times. David has a celebrity client base and has been collected by Kate Moss and Nile Rogers of Chic. 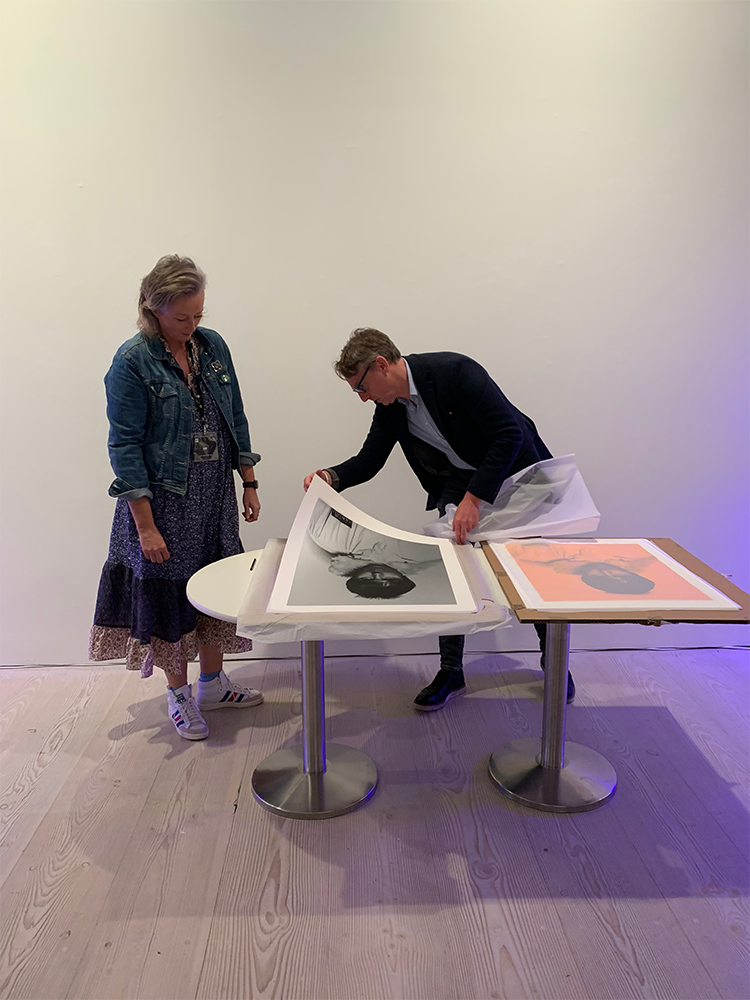 David – My work focuses on celebrity, the dark side as well as what we see in magazines or on TV.

It harks back to classic bygone eras like the sixties and the seventies; a time when celebrity held a different meaning to what it does today. It was somehow more dignified and glamorous back then.

In terms of the Liam Gallagher project-I chose to switch my gaze from those classic eras to the nineties when Britpop was exploding in the UK.

David – Scarlet Page has been on my radar for a while because we are represented by the same gallery. She is the daughter of legendary guitarist Jimmy Page of Led Zeppelin fame and therefore has a very strong music connection which is right up my street. I was at art school when Oasis were being blasted out over the airwaves so it felt only natural to switch my focus from those classic bygone eras to the nineties-arguably a classic era in its own right-certainly in terms of popular music.

I wanted to echo the hedonism of those times which is why I decided to use diamond dust and metallic inks to add a level of glamour to the works. 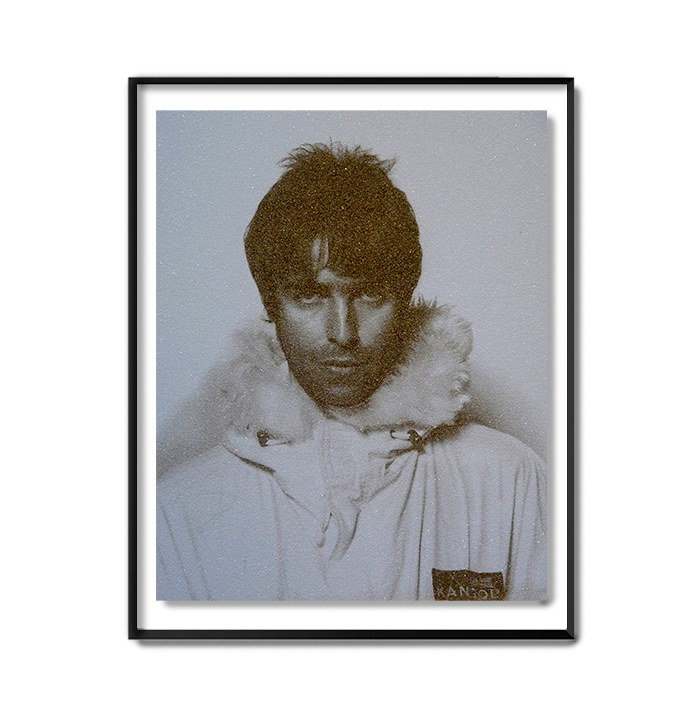 Scarlet – This shot was taken in the daytime before a Black Crowes concert it was for a feature for an American magazine to do with an upcoming tour called ‘Brotherly Love’ with the Black Crowes and Oasis. There were plenty of jokes, beer and cigarettes in the corridor!

David –  To me the images look like they were taken in a studio; adding a certain glamour and capturing the hedonism of those times. I wanted some of the grime and grit of a band on the road to remain in the images as well. 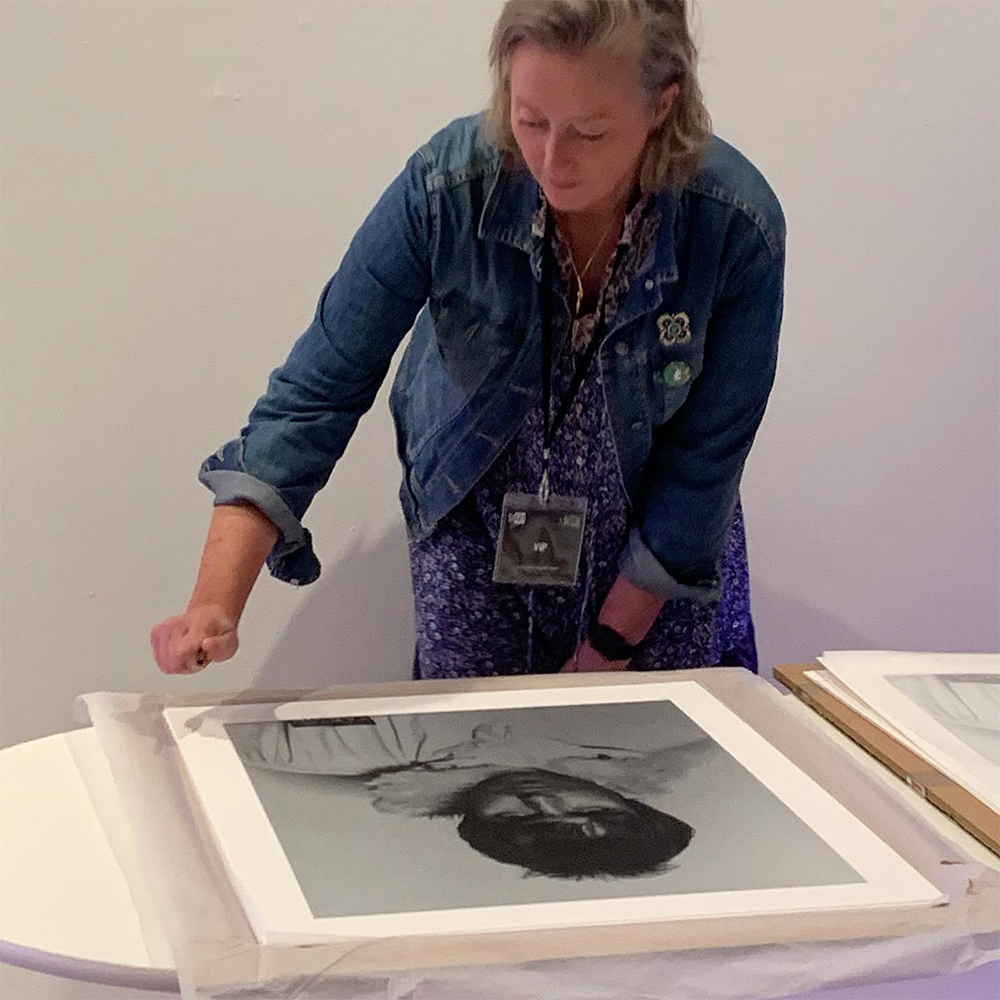 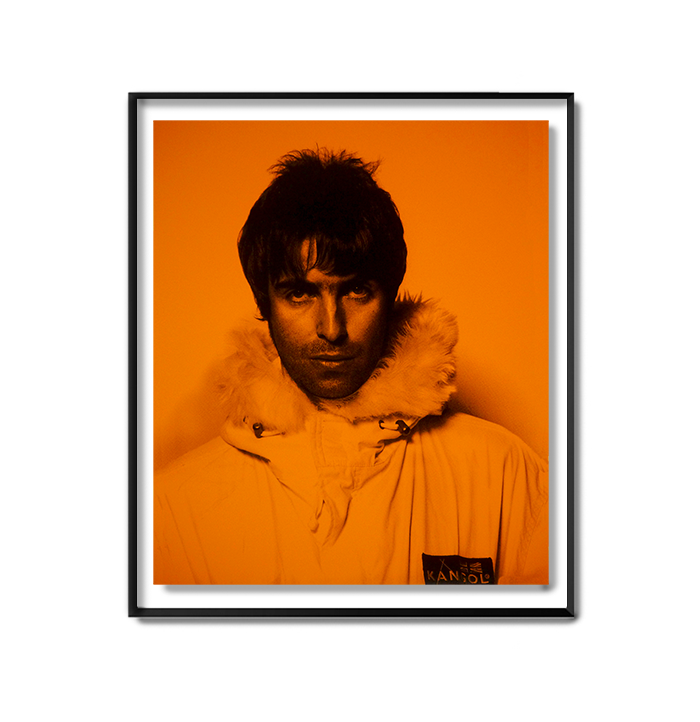 David – Liam was the frontman of Oasis and although Noel wrote much of the music, Liam was always at the front of everything. For me he also epitomises rock n roll.

He had a certain swagger and captivated audiences. Liam had rock n roll attitude in abundance which Scarlet captured perfectly in the photograph.

David – I wanted to encapsulate the glamour and hedonism of Britpop in the nineties; which is why I chose to create some editions in diamond dust and some in shimmering metallics.

When Oasis played Knebworth towards the end they were playing to record numbers of fans-They had an enormous and loyal following. 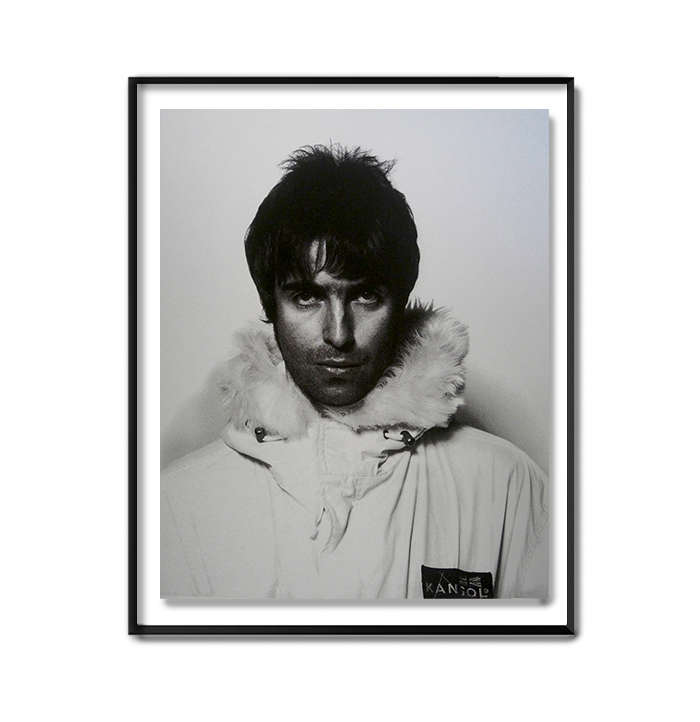 David – I recently created a series of screen prints of Marion Cotillard which was a refreshing step into the present. I believe she will become an icon in time, she has classic beauty and a timeless quality to her.
In terms of future projects I’m currently negotiating a project with a Hollywood actress which involves creating an exclusive series of screen prints of her. I’m afraid I can’t let the cat out of the bag just yet but all will be revealed soon. 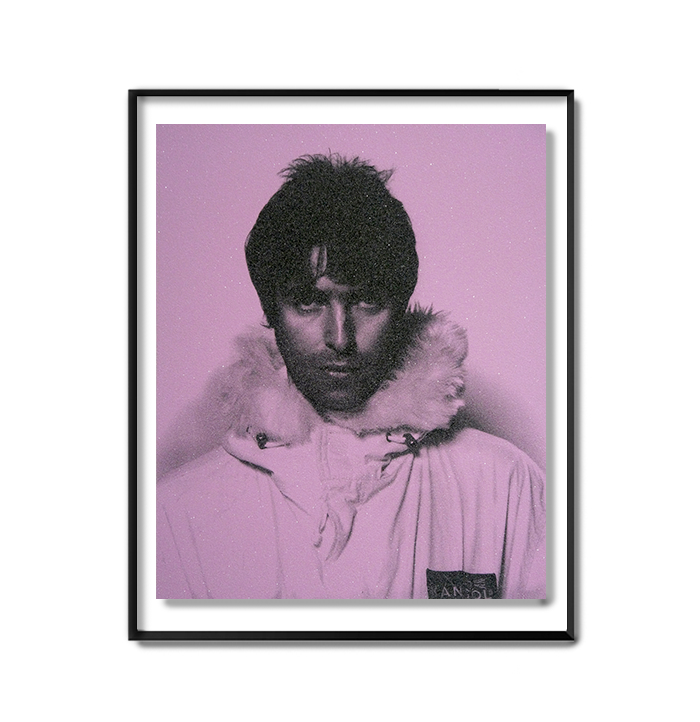 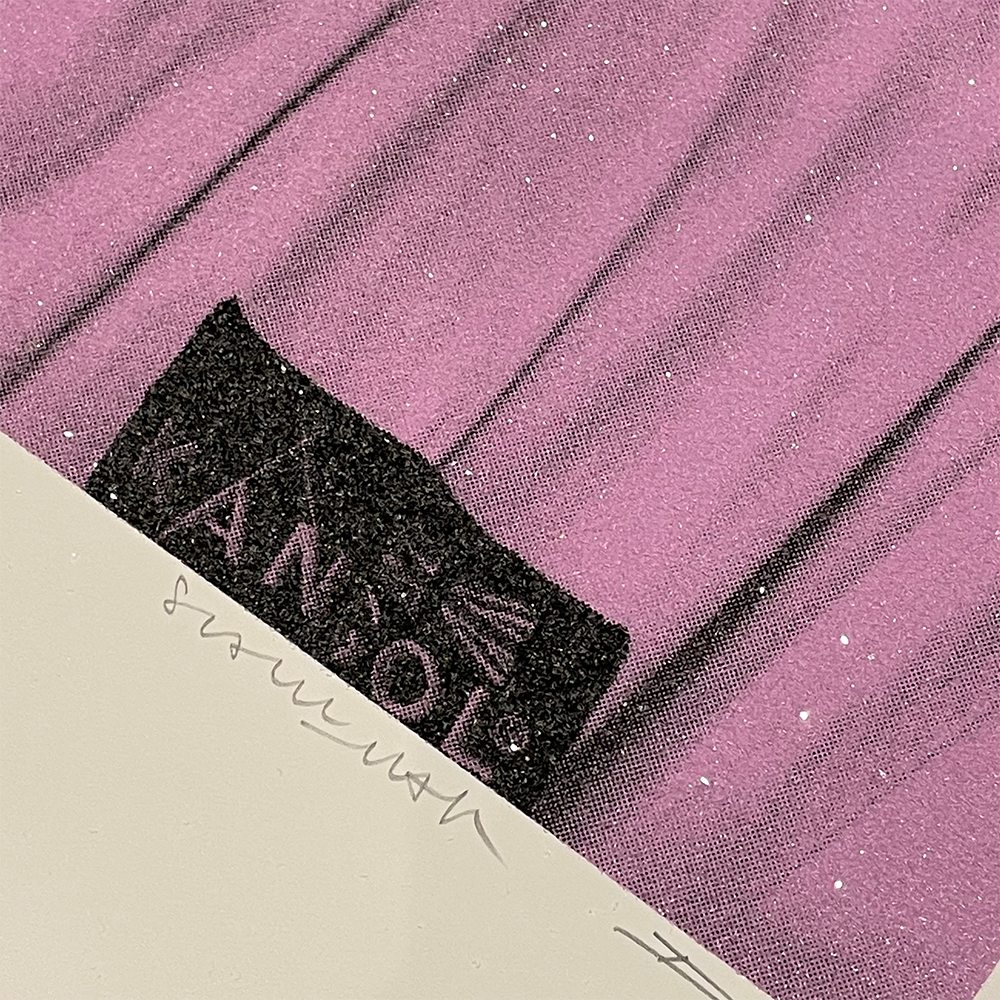