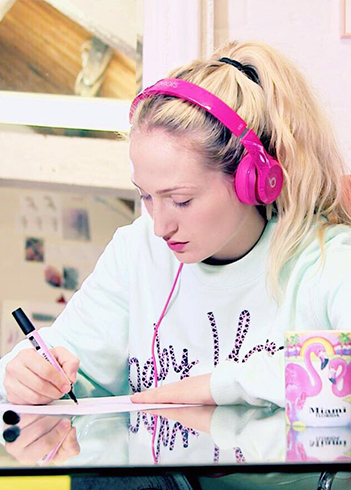 British accessories designer Sophia Webster founded her eponymous label in 2012, and has become renowned for combining feminine design with a sophisticated approach. A graduate from the distinguished Cordwainers College and The Royal College of Art, she debuted her first collection for Spring/Summer 2013. Her products now have an international presence and are distributed in over 200 retailers worldwide.

Sophia was awarded the Conde Nast Footwear Emerging Designer of the Year 2012, British Fashion Award for Emerging Accessories Designer 2013 and the British Fashion Council’s New Gen Award for her first 3 consecutive seasons. She also won the BFC Vogue Fashion Fund in 2016, becoming the second shoe designer in history to receive this prestigious prize. Immediately following her graduation from the Royal College of Art, Sophia was appointed as Assistant Designer to Nicholas Kirkwood.

With a background in Fine Art, her designs are all hand-drawn and conceptualised within the company headquarters in East London. She proves her commercial viability through the diverse selection of styles on offer; heels are offered in a range of heights, and flats, espadrilles and sneakers are available as an alternative for a more casual style. Her collections have also expanded to include Children, Bridal and Handbag ranges, all of which have been successful and proved her signature aesthetic can be translated across multiple categories.

The Sophia Webster flagship retail store was opened in 2016, on Mayfair’s Mount Street. A unique retail design space that translates her signature brand codes into a brick and mortar reality, the interior boasts bespoke furniture in Sophia’s chosen colour palette and cleverly combines details from her cult footwear collections. The store complements the already established but expanding Ecommerce business, and both work in unison to provide a seamless customer experience.